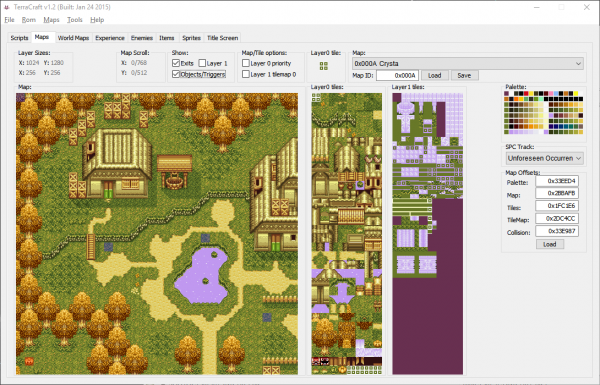 TerraCraft is an editor for the SNES RPG Terranigma.

Currently only the German, Japanese, Spanish and United Kingdom ROM are supported.

Expanded ROMs are supported (6MB), use Lunar Expand and choose "48 Mbit ExHiROM (6MB)"
When using an expanded ROM maps are saved into the new area allowing maps to take up any size.

Simply enter an offset for scripts and an ID for maps.

You can find some script offsets here and some map IDs here.

This tab displays all the level and stat data.

Here you can load and edit maps.

First enter a map ID or select one from the list and press Load, you might need to adjust the map layer options for the map to look correctly.

Editing works by selecting a tile and then clicking on the map, the tile area is scrollable.

Right clicking within the map will select the tile at that position.

You can scroll the map via the scroll wheel, to scroll left/right hold CTRL while scrolling.

It is only possible to place 16x16 tiles due how the engine works.

Once you are done you press Save the tool will then compress the map which takes some time. To test your changes simply select "ROM" and "Save As ..." from the menu.

Since the tool replaces the map data in the ROM, it must the same size or smaller when compressed. The tool gives you a warning when the map is too large.

Open the 'Exit Editor' via the Tools menu. Middle click to select any exit on the map.

This tab displays all the enemy data and their stats

This currently display armor, weapons, rings and all the item names and descriptions.

Write your own event scripts.

"Terracraft.exe is no valid Win32 application"